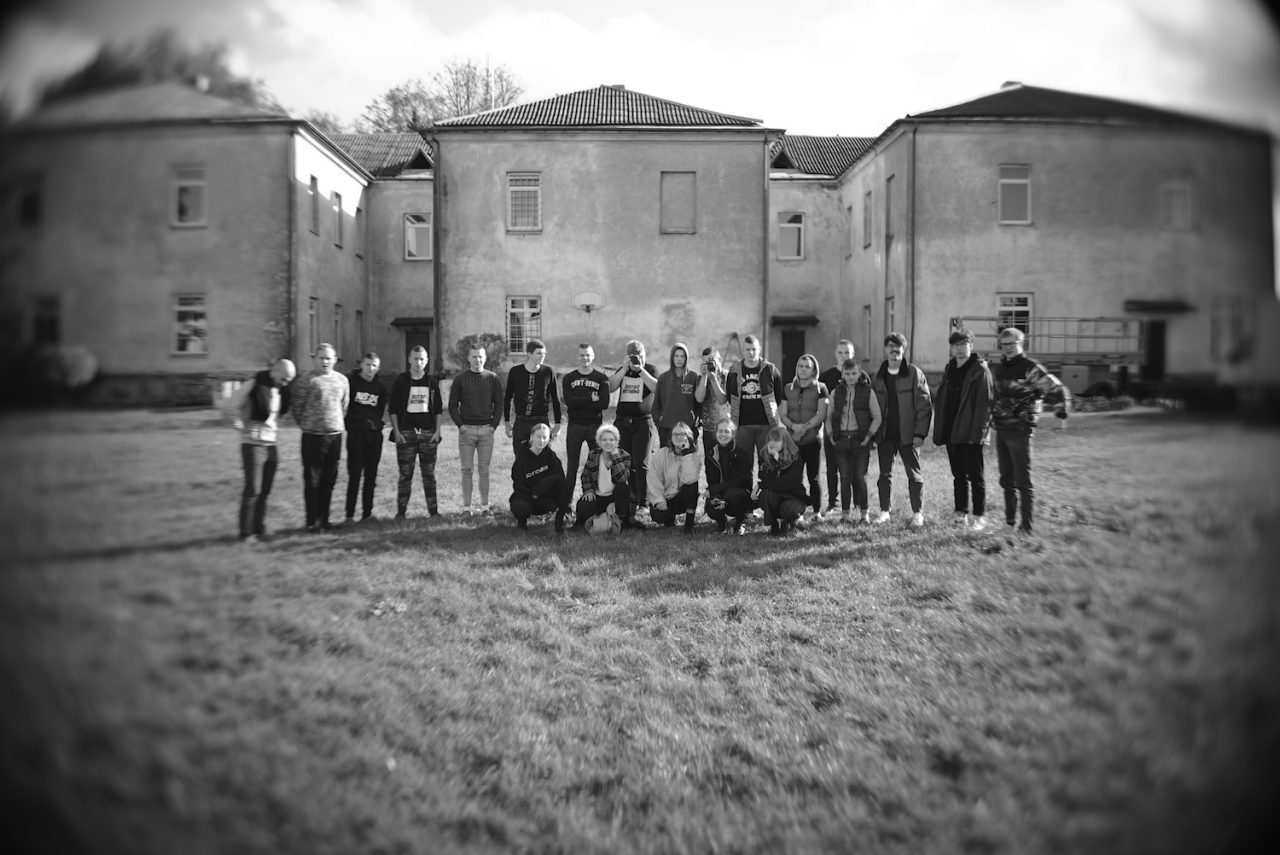 While visiting the “Skalvija” Cinema Centre , A. Goštauto str. 2, Vilnius, you will get acquainted with the residents of Vėliučionys Children’s Socialization Centre. Here, until the 15th of September, the film director Marat Sargsyan’s photo exhibition “It’s not me that is like that, it’s life that is like that”is open –the director saw such an inscription tattooed on one of the guys’ arm.

Marat’s acquaintance with the Vėliučionys Children’s Socialization Centre began at the end of this spring. Here with the film director Andrius Blaževičius they led the creative film workshops of the project “Big Small Screens”, the aim of which is to develop media literacy and the most important competences of the 21st century through practical tasks of audiovisual text production. Vėliučionys Centre is one of the six children’s socialization centres in Lithuania. It is a general education school that provides secondary childcare, basic, secondary and non-formal education programmes, providing the opportunity to study according to initial vocational training programs.

The director acknowledges that while three days of creative workshops is too short a time for students to become critical, creative and collaborative in all situations, he believes this activity is meaningful: ‘Children have tested themselves in an unusual field and if there comes a moment in life where they have to choose from the two: whether to continue what they have been doing so far, or try to change and start something else, I very much hope that our workshop will become that one gram that will weigh the scales. ”

Instead of the planned 3 days, M. Sargsyan visited the centre for a whole month. He is grateful to the director of the centre Vitalija Grigaitienė, who not only provided the premises for the equipment to be assembled, but also gave complete creative freedom. In search of answers, the director had more and more questions, and, while shooting, he caught himself on fire to create a film about these children. According to the director, the questions arose not only about the isolated residents of the centre, but also about us living in freedom.

‘Me and my colleague Blaževičius have worked in many schools all over Lithuania. I had to deal with all sorts of children. At first, these youngsters seemed to be no different, but little by little, interesting things began to open up’ says the author of the exhibition. ‘I started to photograph them with no intention of publishing anywhere. I do this almost everywhere, and later I give pictures to the children. These guys had a weird charm, they did not show off, they did not show any special attention. Children just as any other children it would seem, but the photos revealed some special details – their gaze, behaviour, unusual thinking, goals, and dreams. All this creates their portraits’.

According to the director, this layer of people is in a sense the result of the indifference of our society: ‘Most people about such guys would probably say: drug addicts, thieves, their place is in prison. But perhaps few would wonder if they had a chance to live differently, or if their fate was not determined as soon as they were born. ”

Marat Sargsyan was born in the 15th of February 1978 in Kirovakan city (now Vanadzor), Armenia.Since 13 he worked at Kirovakan Television as an operator and video editor. In 1994 he came to Lithuania and got a job as a cinematographer and video editor at Šiauliai Television, later he worked at Tango TV as an editing director and presenter. At the same time, he created music videos for Lithuanian music performers. In 2005 Marat gave up any activity on television and entered the LMTA Theater and Film Faculty, where he studied film and TV directing. In 2011 he obtained a master’s degree in audiovisual art at the Academy. Currently, M. Sargsyan makes short and long feature films and documentaries. He also works as a lecturer in various educational programmes for children.