Videograms’22: Looking at the Eastern Europe Through the Eyes of Others 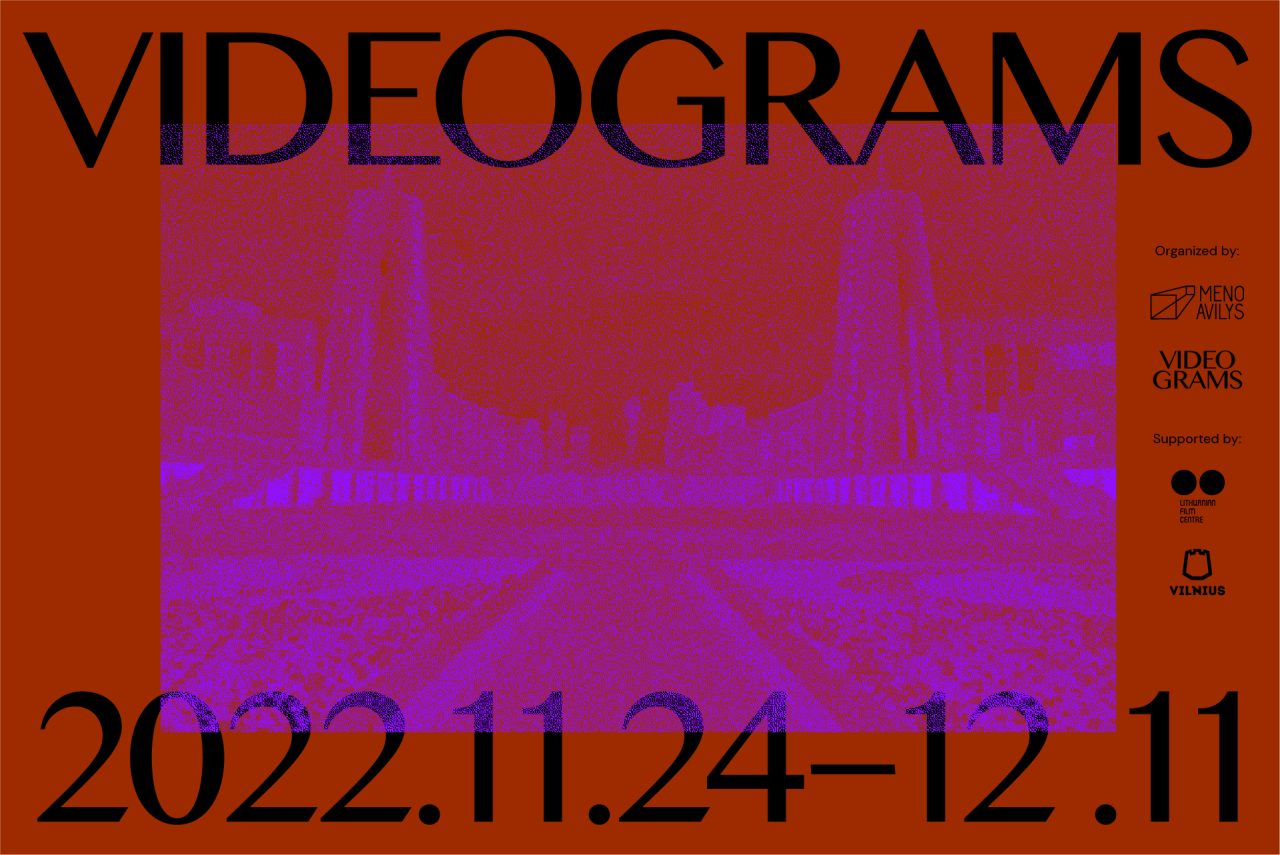 In 2022, VIDEOGRAMS, a festival of artists’ films and moving images, travels back and forth across the heterogeneous, controversial, and highly diverse region of Eastern Europe and its definitions of identity. As Russia launched an open and brutal military invasion of Ukraine on 24th February, ideas about the sovereignty of our region and its authenticity that stress the need to evaluate, analyze and delve into the historical past and develop critical thinking have complemented to the original anxiety and concern. As it turns out, the nuanced reality of the region remains unknown not only to people who do not live here but also to ourselves. Freedom of thought becomes inconceivable without access to various historical sources and uninhibited documentation of the present, the ability to gather in groups, enjoy and share not only high culture but also the very streets that act as a medium for self-expression and non-conformism.

VIDEOGRAMS offers a poetic and critical look focusing on the cracks and amnesias of collective memory. It raises issues related to becoming a part of collective memory, the individual’s participation, their significance in these processes, and the resulting potential for creativity. This year’s festival program invites a critical discussion about the region’s socialist past and its many-sided heritage. It also looks for ways to advocate for the complexity of phenomena in these antagonistic times and seeks mutual understanding with the help of moving images. Most of the films in this year’s festival examine the Eastern European region as seen from its borderlands, fringes, by its close and far neighbours, or through  the cultural influences of the so-called former West.. At the same time, we invite the audience to perceive Eastern Europe as an integral part of global, all-encompassing economic and sociopolitical systems.

In the festival’s program, the Eastern European region is perceived not only as a local narrative or something that thrives in the socialist past but also as a participant in the global financial capitalism and patriarchy—abstract and surreal economic and social systems that enable each other. This theme is further developed in the exhibition “Sleeplessness” curated by Gerda Paliušytė and set up in an uninhabited apartment.

In the exhibition, visitors will see works by artists Tom Kobialka, Peter Wächtler, and Sallamari Rantala, which focus on archaic consumerism and the visual expression of economic systems and how it becomes part of a personal archive. This nighttime story brings together a vampire who spends his days in a castle tower and dreams about a warm blanket, heroes created by the largest Australian bank, which taught children about entrepreneurship, reliefs made of sand, and American marshmallows roasted over a fire. The mood of the “Sleeplessness” show was crafted together with the artist Gediminas G. Akstinas while thinking about an evening at the camping site when the night shadows and the fear they cause become oddly charming and even cozy in a familiar and safe environment.

The VIDEOGRAMS screening program, this year open to the public free of charge, will be held at the Meno Avilys Cinematheque. The programme opens with the documentary by Ukrainian and German directors Tatyana Kononenko and Matilda Mester, “The Building (Budinok / Das Haus)” created at the end of 2019. It gently observes “Derzhprom,” the colossal State Industry Chamber in Kharkiv, Eastern Ukraine, built in the style of Soviet constructivism between 1925 and 1928. In the context of today’s war, when Kharkiv is one of the most devastated cities in Ukraine, the insights of director Tatyana Kononenko, who will be present at the film’s presentation, will be especially valuable. The premiere of the film took place during the pandemic, so it will be the first and special screening of the director together with the audience.

A familiar history of socialism, yet one with absolutely different outcomes than in Lithuania, is analyzed in Marta Popivoda’s film “Yugoslavia: How Ideology Moved Our Collective Body.” The director examines Yugoslavia’s rich archive of moving images that document the evolution of the relationship between ideology and the human body in public space. Yael Bartana’s trilogy “And Europe Will Be Stunned” also seeks to understand the historical genesis of current contradictions, such as the spread of nationalist sentiments in post-socialist democracies. In these two screenings, the coexistence of historical irresolvable traumas and equally contradictory trajectories of utopian expectations suggests that the analysis of these contradictions needs to be undertaken by looking for ways to dive into the shared historical unconscious. According to the historian Timothy Snyder, who studies Eastern Europe pan-regionally rather than on a national basis, “without history, the memories become private, which today means national […] With all of its complexity, history is what we all have, and can all share.”

The program will also address Russian colonialism by invoking the histories of Russia’s indigenous peoples and neighboring countries. A selection of films reveal the complexity of specific areas and the cultivation of customs, lifestyle, and traditions while opposing the ideology introduced by the Soviets, as well as the search for identity and its cultivation after the collapse of the Soviet Union.

Liesbeth De Ceulaer’s film “Holgut,” which talks about climate change but has taken on other meanings in today’s context, tells the story of three Yakuts. Two brothers and a scientist venture into the vast wilderness of the Republic of Sakha with two tasks. Roman and Kyym hunt for a rare reindeer while Semyon searches for a viable mammoth cell that he needs for cloning. The film undoubtedly raises questions about Russian-colonized northern tribal territories. We continue our journey through the steppes with the film “On a Clear Day You Can See the Revolution from Here,” which uncovers various layers of Kazakh mythology, geology, and technology to show the changing relationship between government, people, and their land. The film focuses on the modern processes of nation-building and myth-making and depicts the continuous process of national identity creation. Finally, the poetic “5 Dreamers and a Horse” tells the story of a complex and contrasting Armenia where a generation of young people dreaming of a revolution coexists with archaic traditions and the Soviet legacy.

This year, at VIDEOGRAMS, we also invite you to meet director Simona Žemaitytė at a very special work-in-progress presentation of her new film. In May 2022, Žemaitytė started filming a many-time national weightlifting champion from Ukraine, who temporarily left his country with his family for Lithuania when the bombing of the Irpin city began. Simona Žemaitytė raises questions about alternative forms of resistance, internal and external struggles, discipline, and masculinity. Today, the hero of the upcoming film has returned to Ukraine, where he continues to train Ukrainian children in a city badly affected by the war and prepares himself for future sports events.

One screening of VIDEOGRAMS will be dedicated to skate videos that are of historical value and/or stand out in terms of their cinematography, domestic and international, such as Spike Jonze’s cult “Video Days,” 1991.  We treat this event as a tribute to non-conventional cinema, subcultures, and communities that transcend geopolitical boundaries. Instead of the local expression of skateboarding and the accompanying culture, this screening focuses on the styles and forms of expression that unite different eras and continents, which have already become part of the international industry today. Besides, it is an absolute joy to see the beauty of skating and cinema in one showing.

In 2022, the VIDEOGRAMS festival is co-organized together with Meno Avilys, an independent non-governmental organization founded in Vilnius by like-minded people in 2005 with a focus on cinema and audiovisual media. The synergy between these two independent initiatives allows to pursue common goals in supporting contemporary artists, disseminating their works, and moving image practices that often appear outside the common film market, including more diverse groups of society in the contemporary art processes, and encouraging a more open and comprehensive conversation about the contemporary moment.