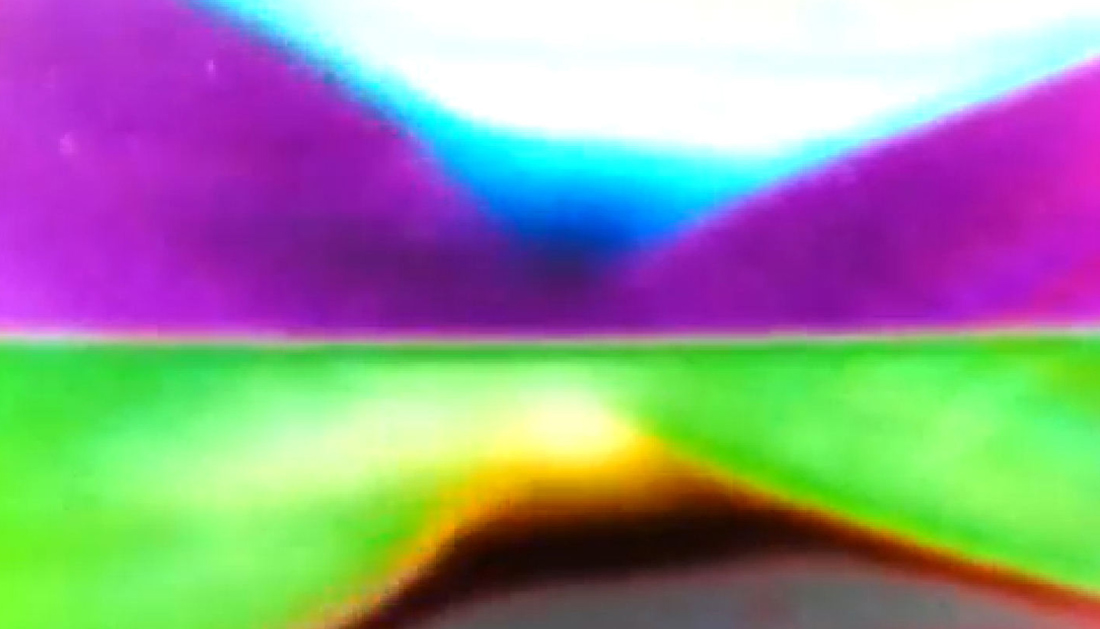 Although the abstract works of H. Gulbinas created by manual image generation today resemble psychedelic painting, according to the creator himself, these connections are foreign to him. The style of one of the early Lithuanian video art pioneers was not dictated by ideology or imagination, but by the video-making technologies of the 90s and the possibilities of expression they provide. The basis of H. Gulbinas’ first video art work “Unimagined Things” is the illuminated recordings of a functioning television, filmed by connecting the television signal to a video recorder and thus extracting the effect of image flow, and their editing. Later, the artist’s colourful abstractions diversified through lighting, glass, a stencil, and other means in the environment. Music has always been important in the creation process of “Unimagined Things”. According to H. Gulbinas: ‘I would imagine, visualize the things based on what I was listening to. This hobby provoked experimentation (…). After filming something, I put a musical background on the video and tried to find a synthesis between audio and video’. The technological principle of creating video compositions without a plot also determined the name. It was provoked by H. Gulbinas’ conversations with friends at that time: ‘Maybe someone said: ‘Oh, but you didn’t come up with these things yourself’  ‘Well, yes, yes, I didn’t’. Today, H. Gulbinas’ independent analogous experiments are not only one of the reference points in the history of Lithuanian video art, but also a lyrical documentary of the technological and musical background of the late 90s.

Henrikas Gulbinas (b. 1960, Kaunas) is a video artist, documentary filmmaker, music lover, and one of the pioneers of Lithuanian video art. In the 90’s, H. Gulbinas resold audio and video equipment, and bought his own first video camera in 1985. By experimenting independently with domestic video recorders, delving into the then possibilities of analogue video signal, editing and their expression, audio-video relations, he created the first works of video art “Unimaginable Things”. In 1988 they were exhibited at the exhibition “Meetings” at the Klaipėda Exhibition Hall next to sculptures by Klaudijus Stepanovas and graphic works by Romas Klimavičius. It was one of the first expositions of early Lithuanian video art. Later, H. Gulbinas was often invited to present, as he put it, the creative method of “video generating” and the video works created by using this method at international experimental film festivals in Leningrad, Paris, Hamburg and elsewhere. After getting acquainted with the Lithuanian emigrant creators in Paris, including Antanas Mončys, H. Gulbinas turned to documentary filmmaking, which he still does today.

Screenings of early Lithuanian video art are presented by the Independent Cinematheque.

The cinema and media space “Planeta” is located in the former second hall of the cinema with the same name. “Skalvija”, “Children’s Land” and “Meno Avilys” operate in the new cultural point of the city. The multifunctional space is adapted for educational activities, film screenings and conferences. A public media library has been operating here since the end of 2019.